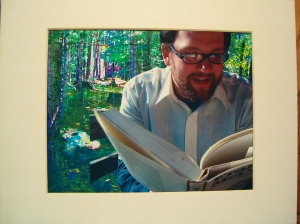 Who you see in that picture is not me

Sometimes people recognize him
saying:
hey, you’re that writer from Lansing
or Flint or something

To which the fake Shawn replies:
yeah, that’s me all right
but you better stay away from me
‘cause I’m a pothead and I’ve never been paid for writing-
not one single damn penny

But here’s where it gets surreal:
apparently I’ve been hired to be me as well

Or, even better:
the me you see (or the me you don’t see)
is an android designed write words
and be a face on a (web)page
for mysterious covert reasons

I (he) could be anything

Or anything else imaginable