bob munchkin had a rifle in his silver pants 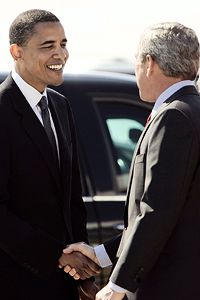 1.
beneath an abnormally large Petoskey stone he found
the storied remains of Obama’s ancient scalp,
dusty and tough like dinosaur hide, unquestionably
historic, luminescent, holographic,
desired by all anthro-ish men and women
donning straw and canvas hats,
combing what once was the shores of the great
lake itself, Michigan, the wettest land of all,
all dried up and sold to the ticket scalpers
outside the ruins of the Silverdome

2.
fill this monster space with muenster cheese and light it with fire
say the scientists, then scream OPA! toward the nipply
Midwestern horizon, let the fatzos jump in,
have their fill, grease dripping from their asses,
hairy and cottage cheesed in the night’s once-humid atmosphere

3.
these dreams are as real as the pain of a hypochondriac
who actually broke his tibia, crying for his mother on the last rock
to the shore, howling at the moon for change and progress
and Obama, Obama, Obama until his breath is hoarse

4.
(from the North the migrants creep down like Atari centipedes
wiggling through the trees to the bottom, to their adversary,
who is much smarter, he simply blasts them and deposits their
electric remnants into the Great Lake beds)

5.
there is a room in the Bush Wing of the White House
that only has one thing in it, resting central on the green marble floor,
a two-cent piece honoring the fallen millions
of Iraqi goats and chickens, their noble heads serene and heroic,
the tail end being a single Afghan poppy, and the people say
“Bush’s head is buried under that coin”
and
although nobody quite believes the rumor,
none of them dispels it outright